This private Berlin tour follows the chronology of the Third Reich: from its troubled and chaotic beginnings, through its dramatic seizure of power and the brutality of the Nazi regime, to the final struggle that led to its eventual downfall.

Wherever possible, we will take you to the original sites that are still standing but will also refer to those that are no longer visible via visual material and stories. Our guides are all history experts with deep knowledge of the era and will be able to answer any questions you have about the Third Reich and its infamy in German history today. 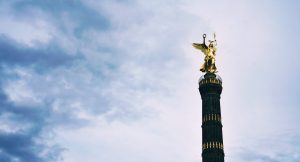 We’ll make stops at sites like the Academy of the Arts, the Reichstag building, the Topography of Terror Museum, the former site of the Führerbunker, and Bebelplatz, among other significant locations along the way:

Reichstag Building – The famous state building which lies at the heart of Germany’s past and present. From the bloody uprising of the 1920s to its famous destruction and subsequent abandonment in 1933, the Reichstag oversaw many of the seismic events in Berlin’s transition from the Weimar Republic into the Third Reich.

The former Site of the Führerbunker – The Führerbunker was Hitler’s final operational place, where he eventually ended his life, stimulating the collapse of the Third Reich and leading to the conclusion of WWII. From here, we take a critical look at what happened next in our city, and how these events were a direct result of the 12 worst years of Germany’s history.

The Topography of Terror – A photographic memorial taking us through the Nazi regime and the stories that it left behind. Spend some time exploring and discussing the key events which took place during the 1930s and WWII period.

Bebelplatz – Famous as the location of the book burnings which pre-empted Germany’s dramatic slide into Nazism. Here we’ll take time to discuss these famous lines in the context of the Third Reich: “Where they burn books, they will in the end also burn people.”

This private tour is flexible and customisable – if there are specific sights or periods that you would like to focus on, please let us know and we can adjust the itinerary to suit your interests. Simply tell us where your interests lie, and we’ll be happy to accommodate your wishes.