Learn about Berlin’s Jewish history on this private full-day tour that takes you to the city’s most important Jewish sites, such as the Holocaust memorial and the New Synagogue. But you won’t just see the landmarks on this private tour — you’ll hear the stories behind them and come to understand the immense influence the Jewish community has had on the cultural history of Berlin.

This intimate and interactive history tour will give you an in-depth look at Berlin’s Jewish past and present. With one of our highly knowledgeable and enthusiastic history experts as your private guide, you’ll get an in-depth look at how Jewish culture and history has shaped the Berlin of today.

Before World War II and the devastation of the Nazis, Berlin was home to the largest Jewish community in Germany. After reunification, Jewish culture began to flourish once again, and Berlin is now home to one of the fastest-growing Jewish communities in the world.

As you listen to moving personal stories told by your guide and visit the many museums and monuments across Berlin, you’ll gain a new understanding of the city’s Jewish heritage. Because the sites are spread throughout Berlin, we’ll take you in our private vehicle and driver so you can see as many as possible in one day.

Some of the main sites you’ll see include the Memorial to the Murdered Jews of Europe (the Holocaust Memorial), the Jewish Museum featuring the spectacular architecture of Daniel Libeskind, the “Gleis 17” Memorial, and any of the large Jewish cemeteries in Berlin — for example, the one on Schönhauser Allee, where the famous painter Max Liebermann is buried. 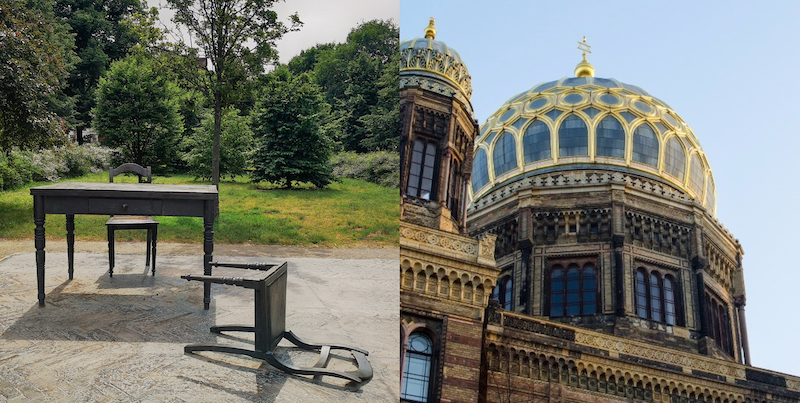 Stroll through the Spandau suburb, one of the oldest neighborhoods in Berlin and packed with history. Wander around the remarkable Hackesche Höfe, which offers charming boutiques, hip cafés and trendy galleries. The Spandau suburb is also home to sites such as Otto Weidt’s former workshop for the blind, the home of the world’s first woman rabbi, and the city’s oldest Jewish cemetery.

As this is a fully private tour, you’ll be able to adjust the day to suit you. We’ll include plenty of breaks, and a stop for lunch and coffee (at your own expense).

Our guides are experts in their subjects, but this is your private tour, and the city has no shortage of fascinating places to see. It’s our pleasure to tailor this tour to suit your interests. Simply tell us where your interests lie, and we’ll be happy to accommodate your wishes.